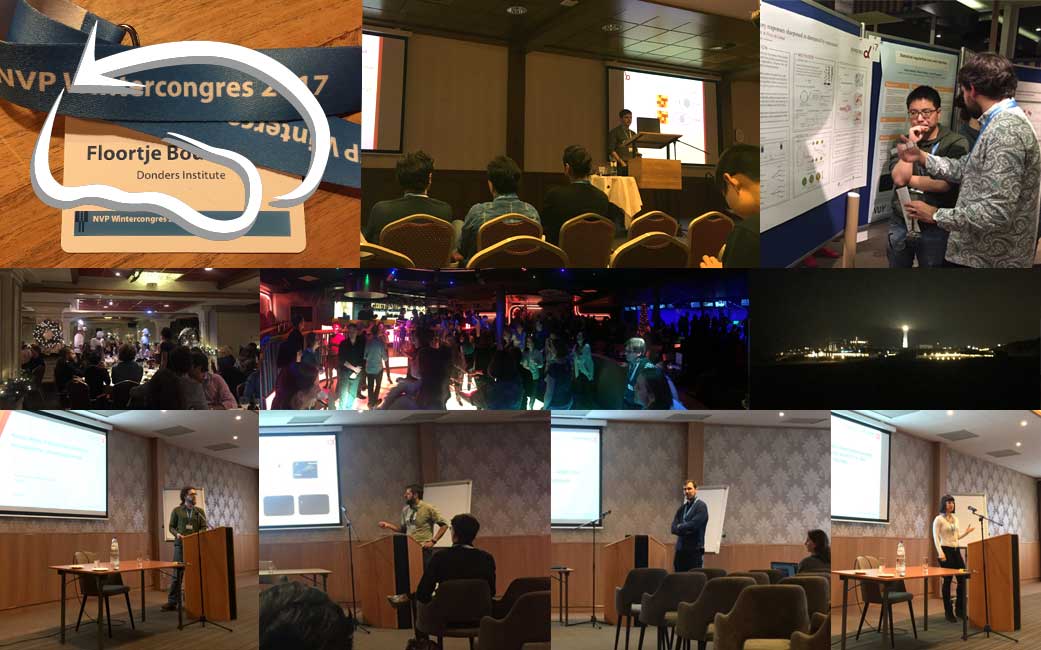 Last week the Predictive Brain Lab visited the NVP Winterconference 2017 held by the Dutch Society for Psychonomics (Nederlandse Vereniging Voor Psychonomie). It is a biannual event where over 300 (mainly Dutch) researchers in the field of experimental psychology and cognitive neuroscience, stationed both in and outside the Netherlands, touch base to present their work and gather socially.

During three days we enjoyed many keynote talks, symposia, talks, poster sessions as well as social events. It gave a very inspiring overview of the current state of cognitive neuroscience in the Netherlands at the various vibrant research facilities across the country:  be it small, the quality was high.

We as a lab were involved in this event in many ways: Samuel Lawrence organised a very well attended symposium on layered fMRI, with contributions of Matthew Self, Serge Dumoulin, and where he himself presented his project on the contributions of cortical layers to sustained visual cortex activity during visual working memory.

Matthias Fritsche gave a talk on how discrimination judgements alter the appearance of visual stimuli. Christian Utzerath’s talk was about typical fMRI repetition suppression, but atypical surprise response in individuals with autism. Matthias Ekman presented the latest findings of his foreward replay of stimulus sequences in human visual cortex. David Richter talked about the neural effects of perceptual expectations throughout the ventral visual stream, followed by Mariya Manahova who demonstrated how prior knowledge modulates visual processing in the ventral visual stream. Micha Heilbron presented how he developed a new paradigm to show that subjective confidence reveals the hierarchical nature of learning during his internship in Paris.

Biao Han presented a poster on his latest project demonstrating that prior expectations can modulate early auditory responses and representations. Lieke van Lieshout  presented a poster on her research on how curiosity varies with uncertainty about information, and not it’s expected value. Tao He’s project on predictive remapping of visual features beyond saccadic targets was also shown in a poster.

Moreover, Floris de Lange invited Christopher Summerfield who gave an amazing talk on the irrationality and optimality of human decision making. In an inspiring hour he walked us through his computationally grounded theoretical framework that showed that when considering ‘late noise;’ being the constraints imposed by capacity limits in information processing by the brain, we can redefine seemingly irrational decision making as optimal. And this holds for perceptual decision making but can also be extended to more economic or value based decision making. Food for thought!

On a personal note; I had never attended conference before and I believe it was a perfect ‘first time’. It is relatively small and very social; I especially enjoyed the many inspiring and enthusiastic interactions I had with other researchers. However, I was also blown away by the intensity of attending such a densely packed and high quality event of which I did not want to miss a minute. The result after these three days was an extremely tired but even more inspired neuroscience student.